This Halloween, let’s take a peek into the Douglas County Historic Research Center (DCHRC) and try to uncover the mysterious connection between these seemingly unrelated yet terrifying clues:

In 2000, the Douglas County, Colorado, Sheriff’s Office reached out to the DCHRC, a part of Douglas County Libraries tasked with preserving the history of this area. They had some fascinating local case materials that had reached the end of their retention schedule. Unless the DCHRC could help…

[More ominous music] The files would be destroyed!!!

But because of previous DCHRC outreach efforts, the Sheriff’s Office knew that there was a local institution that could save local history from an early grave.

The Sheriff’s documents included the original case file for the Adolph Coors III murder investigation in 1960–1961. In addition to numerous case photos, the collection on the DCHRC website, which is powered by CONTENTdm, includes first-hand reports from investigators and the coroner and hand-drawn sketches of the crime scene. Archivist Shaun Boyd, who cataloged the collection, guarantees you a unique and fascinating glimpse into the forensic and police practices of the 1960s.

Storyteller and keeper of lore

Shaun tells us that collaboration between the DCHRC and other local organizations is an obvious choice. People doing survey research go to the county clerk for land grantor records, but to DCHRC for aerial land photos. For genealogists, the county holds relevant microfilm, and DCHRC maintains archives of local newspapers, oral histories and other genealogical resources.

“We’ve just had this very entrepreneurial attitude,” Shaun told me. “We’re a little aggressively evangelical. We go out and talk to everyone and tell them, ‘Use us as your storage repository!’” 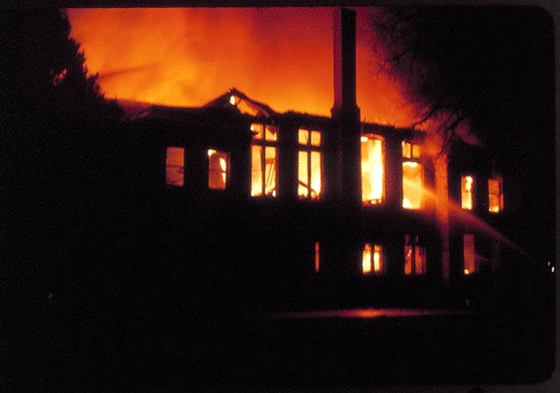 And it’s not just about convenience. Sometimes it’s about…Arson!

In 1978, the Douglas County courthouse burnt down after an attempt to free an inmate from the jail in the basement. Quick-thinking employees saved the county record books by throwing them out the windows into the snow. Helpful citizens collected and held onto them until the courthouse was rebuilt. However, not all of the books made it back to the courthouse. After some community members passed away, their families found some of the books in attics and other forgotten places and brought them to the DCHRC.

When people give the books back to the county, Shaun makes sure that digital copies end up on the DCHRC website. In this way, local history is both preserved and readily available.

But you can’t rely on unsolicited donations. In an effort to maintain a collaborative relationship with six local historical societies, DCHRC helped created Historic Douglas County. This umbrella organization brings all these groups together to coordinate preservation activities.

One group, for example, thoroughly documented every stone in a local cemetery—one of the DCHRC’s most popular collections. With that interest in mind, other groups have begun documenting cemeteries in the area, even coordinating Eagle Scout projects around collecting the information. Without DCHRC’s leadership and willingness to collaborate with organizations throughout the county, the information these groups collect would likely never be found by researchers.

Halloween humor aside, DCHRC’s success is built on a long-term strategy of outreach and cooperation. By establishing a reputation as the community’s story-keeper, they can connect the dots for many local tales.

Because while everybody loves a good mystery, we hate when you can’t find out “who done it.”

What unique, local stories does your library store? Anything scary to share? Let us know on Twitter with #OCLCnext.